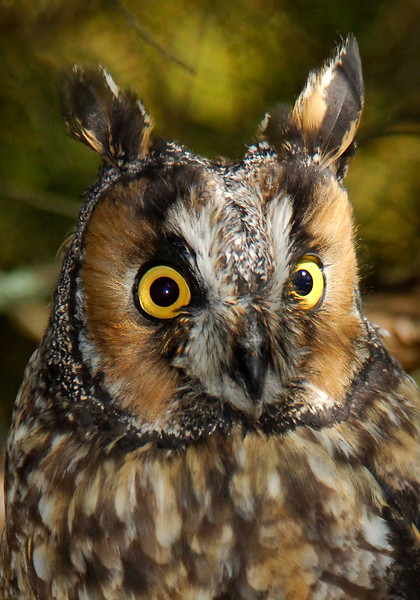 Size: about 15 inches. Wingspan is around 36 - 42 inches and the average weight is between 7 - 8 ounces. The Long Eared Owl is sort of the intermediate between the Great Horned Owl and the Eastern Screech Owl in size. It's "ear tufts" are set closer to the center of the head than other horned owls, and it's eyes are a bright golden-orange. Feet and beak are relatively small in proportion to the rest of the body.

Range: Long Eared owls are distributed throughout the temperate zones of the Northern Hemisphere, in tropical America, and locally in Africa and Madagascar.

Nesting: Usually in abandoned nests - especially crow, also hawks, squirrels, magpies, herons, and ravens. Sometimes will nest in loose colonies. Female selects the site and does all the brooding, fed by the male. Rarely nests on the ground. Nest sites are more often 25 to 35 feet above the ground. Family stays as a unit well after the young have fledged (sometimes until late Autumn), then young disperse to establish new territories.

Average Lifespan: Long lived. In captivity, some records note lifespans of 25 - 27 years. Expect 1/3 of that in the wild.


Notes: These birds are very nocturnal and firmly believe in daytime concealment when roosting. According to most distribution maps, this species is one of the most common in all the planet, close in distribution to the Barn Owl. It is unusual for owls to establish colonies, but Long Eared Owls like company. Varied calls include a series of drawn out hoots (one roughly every 2 seconds) also short soft "barks" and drawn out wails.