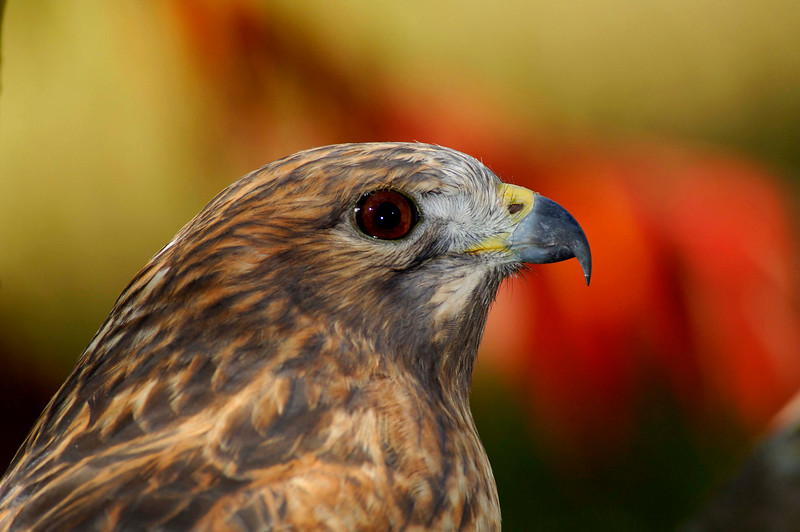 Appearance: head, back and upper surface of wings are a uniform dark brown, underparts are white with medium to heavy rufous barring. Tail is dark with 2 white bands. Crow-sized.

Size: weight ranges from 14 - 17 ounces, males are smaller than the females. Wingspan ranges 32-36 inches, body measures from top of head to the tail averages 14- 18 inches.

Hunting Technique: Hunts from a tree or other perch, very opportunistic.

Breeding: Aerial courtship, the pair flap, sour in circles darting at and passing close to each other. Monogamous.

Nesting: usually in the crotch of a deciduous tree, sometimes in a conifer. Nest is built fresh each year and usually takes 3 - 4 weeks to construct. Sometimes will use an abandoned squirrel nest or other hawk nest. Nest is lined with lichen, inner bark strips, evergreen sprigs and green leaves.

Status: Common throughout their northern range April through September, stay in Central and South America for the rest of the year.

NOTES: Broadwing hawks are highly migratory and form huge flocks for the Fall migration. These flocks are called "kettles" due to their contained swirling and mixing behavior. Kettles are common during migration because these birds use thermal updrafts to lift them high in the air - thermals can rise up over a mile! The birds ride these thermals up high, look south for the next one, and when they have all gotten together at the top of the thermal they will peel off and soar over to the next, more southerly thermal. This technique of migrating saves the birds a lot of energy and enables them to move south very quickly.