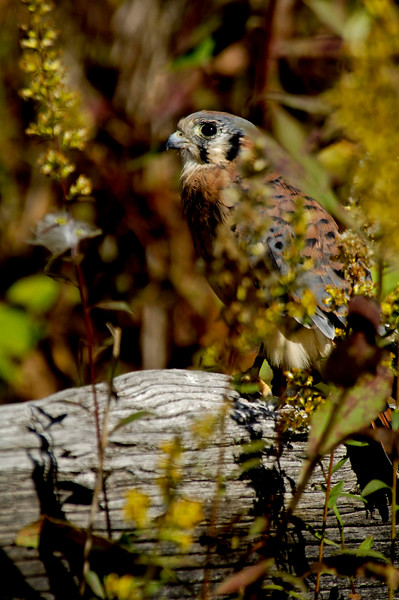 Appearance: smallest falcon in North America, male and female have very different plumage. Male has slate-blue wings, slate-blue cap on head, black vertical stripes ("mustaches") under eyes over white cheeks, the back is rust with black bars, tail is rusty red with black terminal band and a single white with black barred feather on each side of the tail, breast color varies from solid rust color to white with streaks of brown. Female is rust colored with black bars on wings, tail and back, head is similar to male pattern but paler, breast cream with white streaks.

Range: widespread and common throughout North America south of the arctic tree line in most habitats. They prefer more open country although they will hunt open woodlands as well. Northern populations are migratory with some birds moving down through Central America, although the species remains abundant in the southern US during winter.

Nesting: nest in tree cavities, although they will readily accept nest boxes. They will also readily use any holes in cliff faces, cactus, crevices in buildings that are available.

Habits: active flight is light and buoyant, altho when in pursuit of a bird they will chase in a direct rapid flight. Glides on flat wings and is the only falcon in the US that will hover during hunting.

Status: Common throughout its' range.